We need stronger local institutions to fight crisis like Covid-19 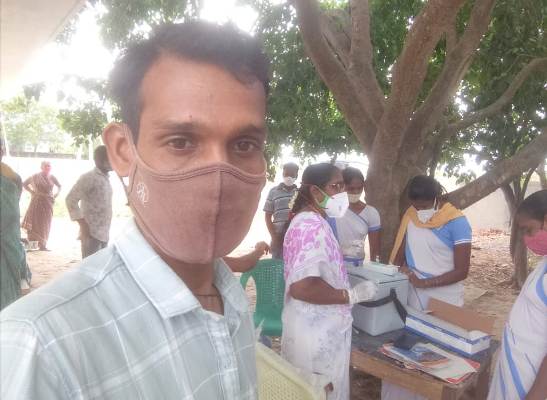 To ensure that Migrant families do not go hungry and are taken care of, have the right information and are guided; with their panic and anxiety addressed and are protected from COVID-19, Swasti is address 3 immediate requirements to protect migrant families – Ration Kits, Hygiene kits and home quarantine kits
DONATE NOW

The second wave is very very different from the first one. The need for medical attention this time is significantly higher, and the gap in our institutions shows just as much. Everyday, I personally receive 40-50 calls asking for help in arranging for beds, oxygen, medicines. These requests are increasing day by day. The Government is doing 30-40 tests a day at the PHC (primary healthcare centre) level, in the urban areas it’s 100-150 a day. But 3-4 times more people are standing in the queue. Government hospitals at urban level have 100-150 oxygen beds. At PHC level, there is absolutely no medical treatment available for Covid. Affordability is very low, only those with financial resources can go to private hospitals. Those who don’t have resources are coming to government hospitals. The community really needs urgent medical support. We are scrambling to get medical kits for the poor and vulnerable people.

Our 15-20 years long relationship with authorities enabled us to contact people at higher positions in departments and ask for help. We have also received help with medical support from local MLAs and ministers who know us. In the last wave, we had more helping hands. When the first lockdown was announced, we went straight to the field with the help of local government authorities. We were supported mainly by NABARD and corporates like ITC, and managed to mitigate challenges on the ground.

This time it’s very different. Because everybody is facing problems! Every institution is affected. Even if someone wants to do something to help, their immediate family and friends need their attention. So, they have to focus on them instead of taking care of the community.

Village level governments need to be empowered for resilience

In Andhra Pradesh, people need more medical help and long term plans to build resilience for such emergencies. Here, most people have immediate cover as most people are linked to the social protection schemes. They are implemented by the Village Secretariat model, with a volunteer for every 50 households to link eligible people to schemes like PDS, pension, etc. Though there is still a need for relief, especially for daily wage labourers, it is better than other states.

Yet, everybody is looking for temporary rather than sustainable solutions at the field level. Because of this, the pandemic has hit so hard again. We had less than one thousand cases in February and in less than 3 months there are over one lac cases, while at least 4-5 lac going unreported. We need better planning and infrastructure at the village level. The communities need to educate and prepare themselves to face calamities. Panchayat as a unit, we should create isolation centres with medical and food supplies to give assurance to communities.

Communication is a challenge

There is a huge gap in levels of awareness, between both the first and second wave.

In the first wave, we had organized mass campaigns on COVID – on precautions to be taken such as physical distancing, sanitisation, hand washing, especially for migrant labourers coming from other states. We used SMS messaging a lot for outreach.

Initiatives like CAC’s High Impact Packages to make people aware of the vaccines, respond to their hesitancy, are needed on the ground. It will actually be helpful for the administration to get the vaccine and the communities to get the vaccinated at the right time.

Livelihoods were hit in unprecedented ways

We work with farmers, whose main concern is perishable items. As an FPO, we ensured we provided support to farmers in selling flowers, vegetables at a decent price. Some farmers didn’t want to take the risk of going to the market and so we helped them assemble their produce at one point, and then send their goods to the market. Since movement of private vehicles was restricted, we got permission from the local authorities for the produce to reach the market.

Marketing the produce was of course challenging. Getting a good price has always been a challenge and now, more so. We were unsuccessful in fetching more than 30 percent of the regular price. Transportation was a big problem and so was getting permits from local authorities. The local police were very stringent and didn’t allow vehicles. (During the first lockdown) They could only travel at night but the market times were between 6-8 in the morning. They lost a lot of produce.

Migrants were another group whose livelihoods have been affected poorly. They have faced unimaginable hardships. Our most impactful efforts were in supporting incoming migrant workers. They were provided with shelter and food. They couldn’t go back to native places, while others came back after going home.

All of us felt we were coming out of this situation and weren’t ready to face the second wave. We need to work on this aggressively at the community level to make them ready for the next wave which comes, which can be more dangerous than this.

(as told to Soumita Basu, The Covid Action Collaborative)